A few fine flying friends have asked me to write a little about my flight, and well ….
who doesn’t like to talk about their flight.

It all started a few weeks ago. After John Janssen went over 200km to a declared goal, followed shortly by Michael Schulte going 343 km open distance, I knew spring was coming to an end and if I wanted to bag a big one, I best get serious.

Looking at the forecast two weekends ago, Nanton looked real good early in the day. I convinced the crew I fly with we should go to Nanton. Well we arrived about 10:30 and so did the high overcast.
Extended sleigh rides in light lift is all we had until 4pm. Of course the sky looked great in the direction of our regular tow road. I vowed not to chase the weather anymore……..this lasted about 3 days.

After spotting the good lift and winds in Saskatchewan on XC skis, I thought why not drive out there. I ran my crazy plan by my wife, Cathie, and she was on board with the idea. I called Dale and he was quick to secure tow and retrieval drivers.
Boy there was no backing out now. Cathie and I studied air space and watched XC skis the next several days, and nothing changed. I contacted Nicole to get this transponder requirement thing cleared up, and Nicole taught me a few other things about CYA’s and airways. This was very helpful. Thank you Nicole.

After dinner with friends Friday night, I left home at 11pm, and started my 6 hour drive. I was wondering if I really needed some kind of therapy at this point, the hang gliding was kind of getting out of control. With the VW camper, the plan was to pull over and sleep halfway to Dale’s, and drive the remainder in the morning.

Saturday morning I showed up at Dale’s, had a quick breakfast, then we drove the 5 minutes to the tow road. Saturday I went about 73km, and Dale was around 40km. I may have been going too fast, and Dale got eaten up by some hail. Well we were home for a delicious rib bbq, with all the trimmings, so pretty good day, eh!

Sunday we went over to Dale’s dad’s for breakfast, before he towed us up. We arrived at 9:00 and set up our gliders before breakfast. It was nice to set up on grass, protected from the wind. I think this is the earliest I have ever set up my glider.
While having breakfast on the deck, the high clouds started to make their move, and it wasn’t long until I was promising myself again not to chase the weather. Then I received a text from Cathie, ” It looks best to go between Regina and Moose Jaw” then head more east when you get to Weyburn”…..
So after I have gone further then I have ever flown, I should contine to Weyburn, then head more easterly. hmmm
I’ll try my best to be a good husband and follow directions, but with this overcast its going to be a bit hard.

Dale went first and disappeared. I wasn’t sure if he went to his farm, or got up and away. I launched about 45 minutes later after sorting out the rope and a few things, then glided downwind. I tried to stay positive even though the sky was less than ideal.

I did manage to get up and after about 25 km it did improve and was pretty easy cruising. I created a “go to Regina” on my gps, to see how my drift would compare to the course line, and see if I would pass to the north east or south west of Regina.
As Cathie predicted the south west side was the way to go. Regina did look big and close as I went by, and I thought I may have messed up. This did effect my head space and the next several climbs. Then I just said it will be what it will be, and just went back to concentrating on flying.

Another thing I did on this flight was have time of day displayed on my GPS. Normally I do not have time displayed, just distance to goal, but when your goal is the horizon, its nice to have the time. I would tell myself I can’t check the distance I have gone until 5pm, then 6pm…
This helped keep me going, and gave little rewards at certain times.

I turned final 6.7 hours after takeoff. I checked my instrument once on the ground, and it said 395 km back to takeoff. Boy that felt good. Then as soon as the iphone fired up, it was a quick call to Cathie.
Cathie had been following the spot, and cheering me on all the way. I was quick to ask how I looked going by Regina, and she said good, right down the middle.
Now I had an even a Bigger grin. Stewart Midwinter was quick to congratulate me as he also had been following my spot page on this flight and yesterdays 73km.
Texts and calls came in, and it sure was nice to get congratulations from my friends…. even though I know some are out to beat me.

Dale had flown 260km, a mighty fine flight as well. Jenelle had already picked up Dale, and they were about 30 minutes away from me. I quickly packed up, well not really that fast, come on now….?
Wes, a local guy, was driving by and stopped to visit and chat. As we rolled my wing I told him about hang gliding, how far the furthest flight in Canada was, and answered his questions…. No, I didn’t have to go to the washroom.

About 5 minutes after everthing was in the bag Dale and Jenelle showed up. We stopped for dinner and were home by 1:45 AM. Pretty sweet eh! Yes I owe Jenelle big time. Well actually I owe the whole Regehr family Big time.
Dale is very keen and enthusiastic and was great to fly with. Thanks Roger for all your help, and if it wasn’t for Jenelle we would still be out there.

I also want to thank my wife who encouraged me to go do this flight. Cathie checked the XC skis with me and was biting her nails as she watched my spot cross Saskatchewan. Dale said he is going to start calling Cathie now for flight planning.

I know now that 500 km is certainly doable on the Canadian Prairies.

Climbs:
Also looking at the IGC, in See You, I confirmed that most my climbs were around 200 feet per minute, 1 meter/second. If one could average 400 feet per minute, this would save alot of time. You could use this time to glide and climb even more 🙂

Wind:
The wind was ideal on this flight, averaging about 37 km/hr. It also held its direction for the whole flight, not veering or backing. This really helps, as the wind gets stronger it becomes even harder to fly cross wind. The wind changing direction is fine for Free Distance (with up to 3 turn points) however.

OK, I have to go to my therapy session now.

Check out the HPAC website and see some of the other record breaking flights that happened recently! 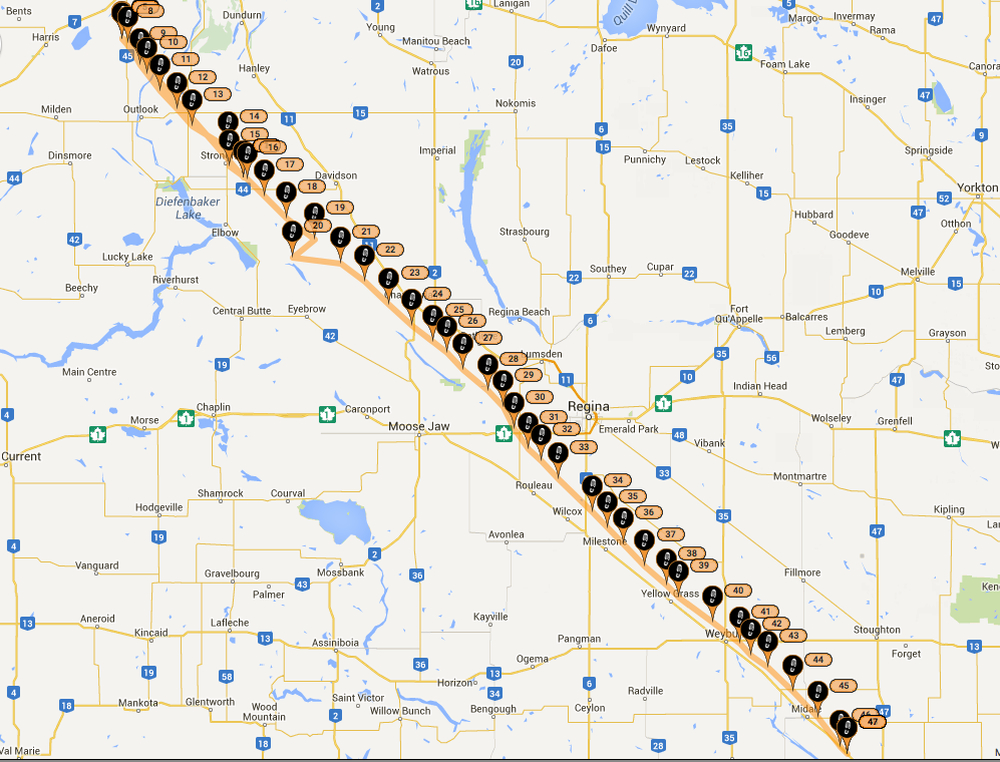 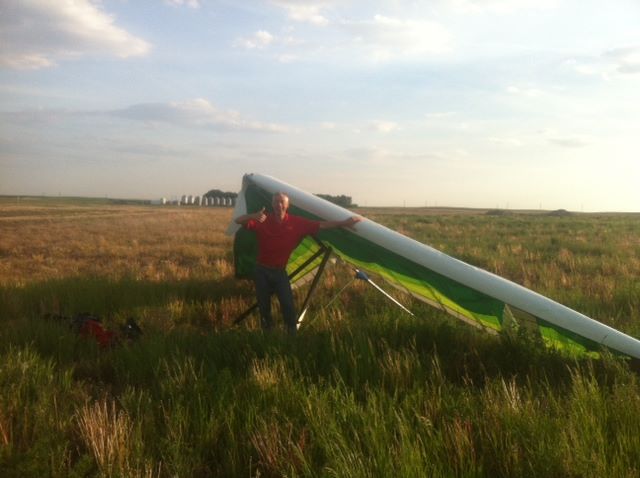